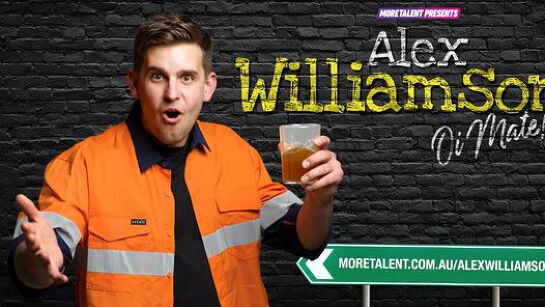 Just when we really need him, like some sort of cooked Superman, Loose Aussie - Alex Williamson is back with another crushing hour of pure, uncut comedy platinum! Enter the mind of Shooter if you dare - as he breaks down walls with his bare hands (metaphorical bricks on the walls of social norms, he’s not doing house reno’s).

Since starting out in stand-up 2007 this country South Australian lad has made a name for himself globally – selling out Australian, Edinburgh Fringe and New Zealand seasons year after year.

'Hilarious... the Aussie comic has well and truly earned his rave reputation' The Speakeasy (NZ)

'It is a massive relief to find a bloke like Alex Williamson - laidback, punchy, charismatic, fearless and provocative - as hilarious as it is appalling. I hope he never mellows' The Scotsman (UK)

★★★★ 'His observational humour should serve as a very necessary kick in the bollocks to many of his overexposed predecessors. This is how a modern comic mind SHOULD work' The Herald Sun